The maize which the two men harvest together is a symbol of the choice the two communities have made: to live and develop together.

Ouro-Souley, Adamawa. Since dawn, somewhere along a small river marking the border with CAR and Chad, all one hears is the squealing of dry maize plants, as dozens of people, both male and female, Cameroonian and Central Africans alike, harvest maize, separating the cobs from the husks. As the sun moves across the sky, work becomes more and more tedious, with the beginning of the dry season bringing about heat which is becoming overwhelming for the workers.

With bare hands and in an animated atmosphere, the corn field is gradually cleared as work progresses. The cobs are passed from hand to hand, thrown into jute bags and carried away as the farmers move along. If the atmosphere is particularly joyful today, it is because a small miracle has just happened: a buyer has committed to purchase the entire harvest, at a fairer price compared to what is usually obtained in the market. The company is called MaisCam and it is the largest corn processing plant in the country.

Today, a small team from the United Nations Refugee Agency, UNHCR, accompanied by partners from the Lutheran World Federation (LWF), has come to meet these small-scale producers who are bent double, as if to prove they are ready to work hard enough to honour the terms of the contract. And what is in store for these refugees and their Cameroonian friends is the guarantee of an income and the end of dependence on humanitarian aid.

Carried back to the village on the back and on the head, the heavy bags of maize are placed in a small room where young energetic men thresh the cobs with the use of clubs, then the grains are put into bags of 100kg which are in turn stored away in a granary before being transported to the MaïsCam factory, located on the outskirts of Ngaoundéré, chief town of the Adamawa region.

A stable market with real needs.

"Here, we process an average of 120 tons of maize per day, with most of the production to be supplied to breweries in Cameroon, and another large part produced for the World Food Programme (WFP), to whom we supply fortified flour," explains Rodrigue Tchana, the Operations Manager at Maiscam, surrounded by 5000 hectares of farmland.

"What we produce ourselves represents 50% of what we transform. We therefore need the farmers to supply to us the remaining 50% of maize. The need is real because it is sometimes even difficult for us to satisfy our customers’ needs. What these small-scale farmers can supply to us is therefore always welcome," explains Rodrigue, in the shade of a huge grain storage tower at the factory – and inside few workers are fillings customized bags, stamped "MaïsCam" with either flour, grits or provender.

And if these small-scale producers, who live in remote and often isolated villages, rarely have access to this market, it is because it takes a whole supply chain to bring the fruit of their labour to the factory. That is why the small cooperative in Ouro-Souley used to sell their produce only in markets, and were often victims of permanent price fluctuations, and sometimes even lost their harvests which, stored for too long in poor conditions, was subject to all kinds of bad weather.

A few miles away, El Hadji Mohamadou Ousmanou Abbo smiles at his guests. In his sumptuous and very famous ranch in Ngaoundéré, he welcomes his them and talks about his old age and the strength that is gradually leaving him. But when it comes to talking business, the tired body gives way to a sharp mind. The story of the businessman is a famous one in Cameroon: it is the story of an orphan who did not go to school, and who moved from blacksmith to shoemaker, tailor, driver, mechanic, before embarking on business and finally building an empire.

"And these refugees, do they harvest manually? It's a tough job. Very painful," comments El Hadji Abbo, before explaining: "I need to buy to be able to transform. And I encourage farmers as much as possible. So, we can start with small quantities, and gradually we will grow together.”

"It's small. I am able to purchase more if I am assured that the delivery will be made on time and the work well done," says the businessman, moved by the plight of refugees. He himself was much affected by the different wars he crossed on his long road in life, particularly in Chad and Nigeria.

Back in Ouro-Souley, sitting in a shade from the high wind, the "elders" of the village engage in a conversation over sweetened tea. Among them is the village chief, Abdoulaye Yougouda and Adoum Djabir, the head of the refugee community, who came here more than four years ago, when the war was raging on in the Central African Republic. Since then, the small village has more than doubled in size: "Today, we have 390 refugees and 324 Cameroonian nationals. We have made room for them and given them some land, that's for sure. But we are more or less on the same level, we work together, and over time we have become part of the same family," explains Abdoulaye.

The maize which the two men harvest together is a symbol of the choice the two communities have made: to live and develop together. By freeing themselves from humanitarian aid, they no longer present themselves as needy, but as entrepreneurs, producers and consumers, a business that would probably never have been possible if they had not made the choice of cohabitation.

"At the very beginning, it was difficult. There aren’t many resources here, so when we arrived there were conflicts between us and Cameroonians. But today I can say that I feel at home, really at home. I almost forget the life before," explains Mariam Adom, 28, who arrived here alone with her two children after her husband was shot and killed in Bocaranga, Central African Republic, during the war. Today, the children are seven and four years old. At the time they crossed the border, the second child was just a toddler.

Mariam speaks with a confident and calm voice. She never searches for words; one can tell she is perfectly at ease. Through her smile, one sees the treasures of self-sacrifice, courage and resilience which she had to invent to take care of her children, face life and forge a new destiny.

No charity, but business.

Nearly 272,000 Central African refugees are still living in the North, East and Adamawa regions. In recent weeks, several thousands of them made the choice to return to their regions of origin, as the security conditions permitted. But for many others, the time for a return home has not yet come, and with humanitarian aid shrinking year after year, economic empowerment has become an absolute priority.

"What UNHCR did in this operation was simply to facilitate the networking of all actors in the maize market system. We put the producers in contact with wholesalers, transporters and finally the buyer. It is a chain in which everyone has a margin and will not require the intervention of UNHCR or the humanitarian community to be sustained. In the near future, these small-scale producers will be effortlessly autonomous and will have a deserved place in the local economy," explains Yves Amoussougbo, who is in charge of the project for UNHCR in Cameroon.

For Kouassi Lazare Etien, Representative of the United Nations Refugee Agency, "Humanitarian work is often considered a simple emergency job. But our work is not just limited to protecting refugees when they arrive in a host country, providing them with shelter, care, water and food. Our job is also to find sustainable solutions for them, to ensure that they can live with dignity, in harmony with their hosts and that they can become economically independent as soon as possible so they can fully contribute to the economic life of their host country. With this project, we hope to demonstrate that refugees do not necessarily leave a negative footprint, but that they are also a source of wealth and development where they settle.” 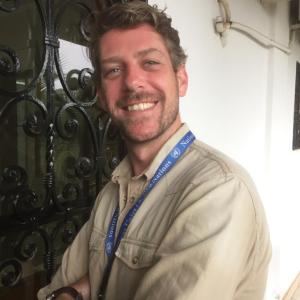